She has judged Canadian Sanction Matches, specialty Sweepstakes for the Canadian and Quebec Bernese Clubs, and Sweepstakes in the USA in Maryland, Alaska, Ohio and most recently for the Bernese Regional Specialty in Wisconsin. She has also judged a Bernese Sieger Show in Wisconsin and presented a Judge’s seminar on the breed for the Valley Kennel Club in Ontario. In addition to multiple National and Regional Specialties in North America, she has attended Bernese Mountain Dog Specialty shows in France and Switzerland.

In 2017, Kathryn obtained her CKC judging license for the working group, and has had the opportunity to judge in Toronto, Ottawa and Cornwall, and next year in North Bay and Belleville.

She is a member of the BMDCC, BMDCA, BMDCO, and the
Canadian Dog Judges Association (CDJA).

Denis has bred Saint Bernards under the kennel name of « Napoleo » since the early 1990s. Napoleo kennel follows in the footsteps of the best breeders in order to produce its own blood-line matching as close as possible national and international standards. It is a small-scale family kennel that has produced many great Canadian champions.

Denis grew up close to a Saint Bernard breeder who motivated him to start competing in dog shows. He has presented several dogs in Group 3 and handled a Bernese Mountain Dog in the famous New York City Westminster dog show. 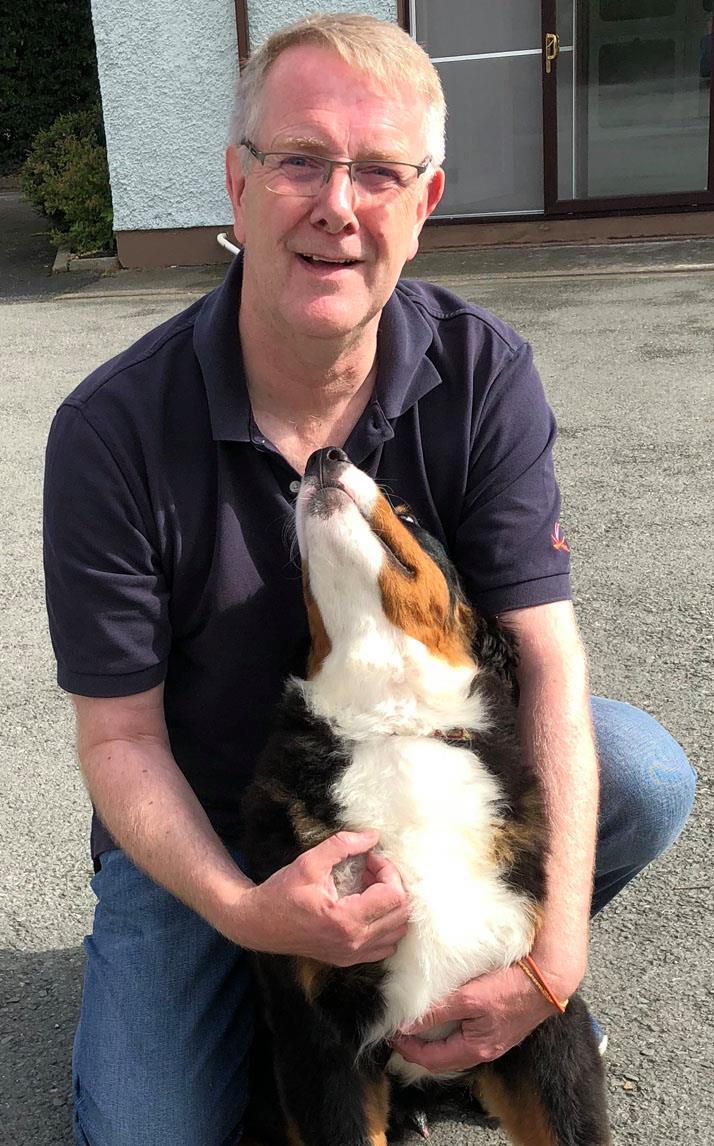 As a child, Tom Kelly always had dogs at home, ranging from Shetland Collies and Spaniels to Poodles. After graduating and living in London, England, and then Belgium for several years, he returned to Edinburgh, where he bought his own home and got his first dog. This dog was Tom’s first Bernese, purchased in 1990 after waiting for nearly a year. Since then he has shared his life with an ever-present gang of Bernese, Newfoundlands, French Bulldogs and now Dachshunds. He currently lives with 6 Bernese and 2 Dachshunds.

Tom was fortunate enough to make contact with breeders in Finland and Belgium and to purchase dogs from their combined breeding lines. He continued with purchases from breeding lines from Sweden and the USA and has recently continued on his Bernese journey with of dogs from kennels in Estonia, Russia, and again the USA.

Tom started judging Bernese Mountain Dogs in 1992 at Open Show level. He has awarded Challenge Certificates (CCs) at Championship show level in the UK since 2014, and currently has judging appointments extending to 2020. He is approved by the UK Kennel Club, the Dansk Kennel Klub, and the FCI to judge Bernese Mountain Dogs. Last year he had the privilege of judging the Dansk Berner Sennen Klub 2017 Specialty show. 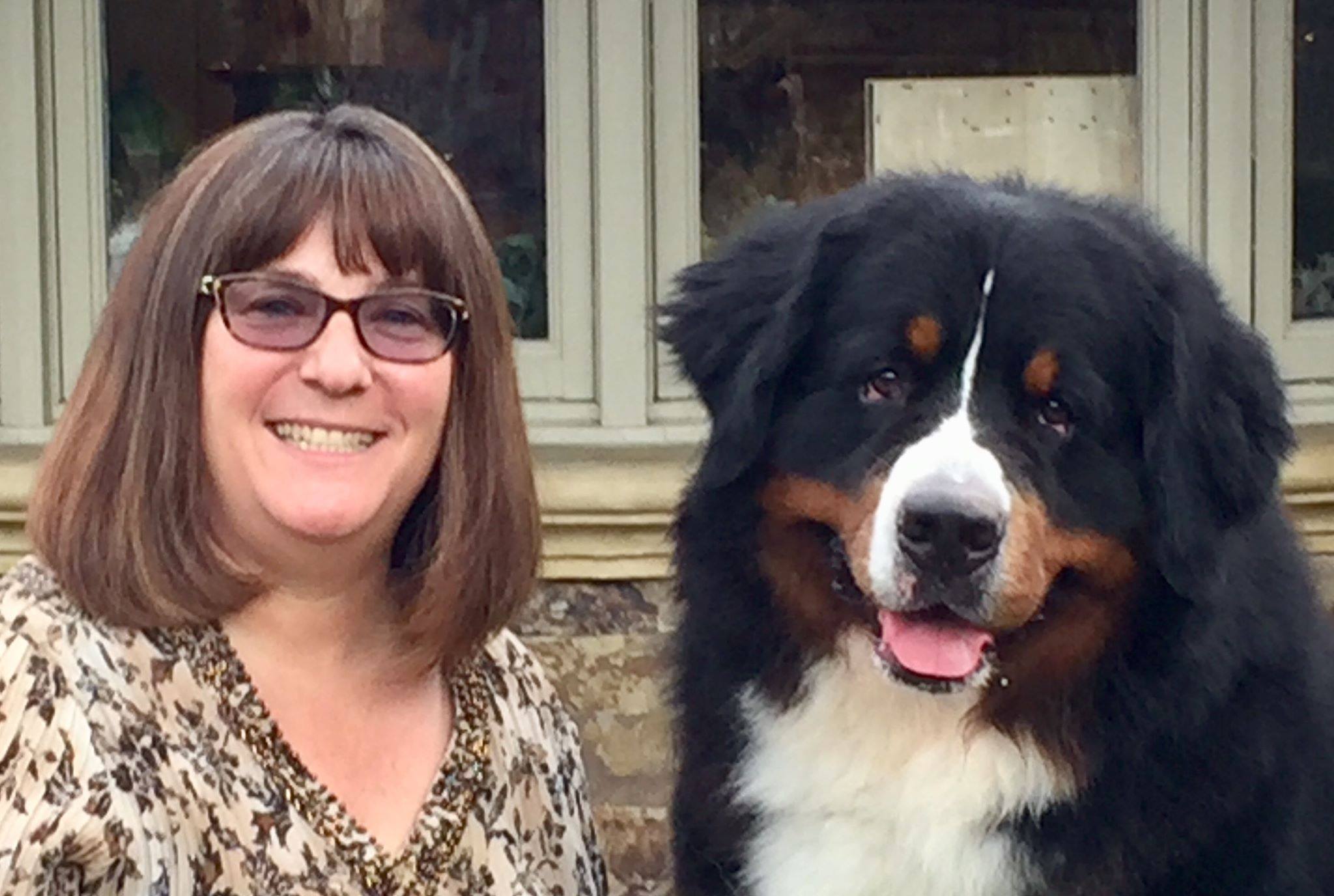 Susan saw her first Bernese Mountain Dog in the mid-80’s, and like each of you, she was instantly hooked. Through the years, she has raised and handled several Bernese Mountain Dogs to their championships in the United States. She considers herself more of a breed specialist than a breeder judge for she believes breeding a litter here and managing a stud dog there, does not a breeder make. (She has tremendous respect for our reputable breeders for their hard work and dedication; breeding is not for the faint of heart.)

Over the past 20+ years in her quest to become a breed specialist, she has developed her eye for a Bernese Mountain Dog by seeking out mentors who have imparted their wisdom in evaluating breed type, structure and movement. She continues to hone her skills by evaluating litters for others, attending BMDCA Judges Education (as both a participant and ring-side mentor), and periodically judging puppies and veterans; she has had the immense privilege and pleasure of judging sweepstakes classes at eight Regional Specialties and two Supported Entries (Boosters) in the States over the past 10 years.

In addition to periodically showing and judging in conformation, Susan works with her husband to train their dogs in Obedience and Draft because she believes strongly that beauty AND brains matter! The remainder of her time has been spent serving the BMDCA in many capacities, including past BMDCA National Specialty Coordinator and Assistant Show Chair for two BMDCA National Specialties. She is currently serving that club as its Moderator for the Judges Selection Committee and manager of its web-based store; she is also a Trustee of the Berner-Garde Foundation.
Susan was awarded lifetime membership in the BMDCA in 2008 for her outstanding service to that club. She is retired and lives with her husband Phil and their two berners, Willie and Chunk, in Yorba Linda, California. 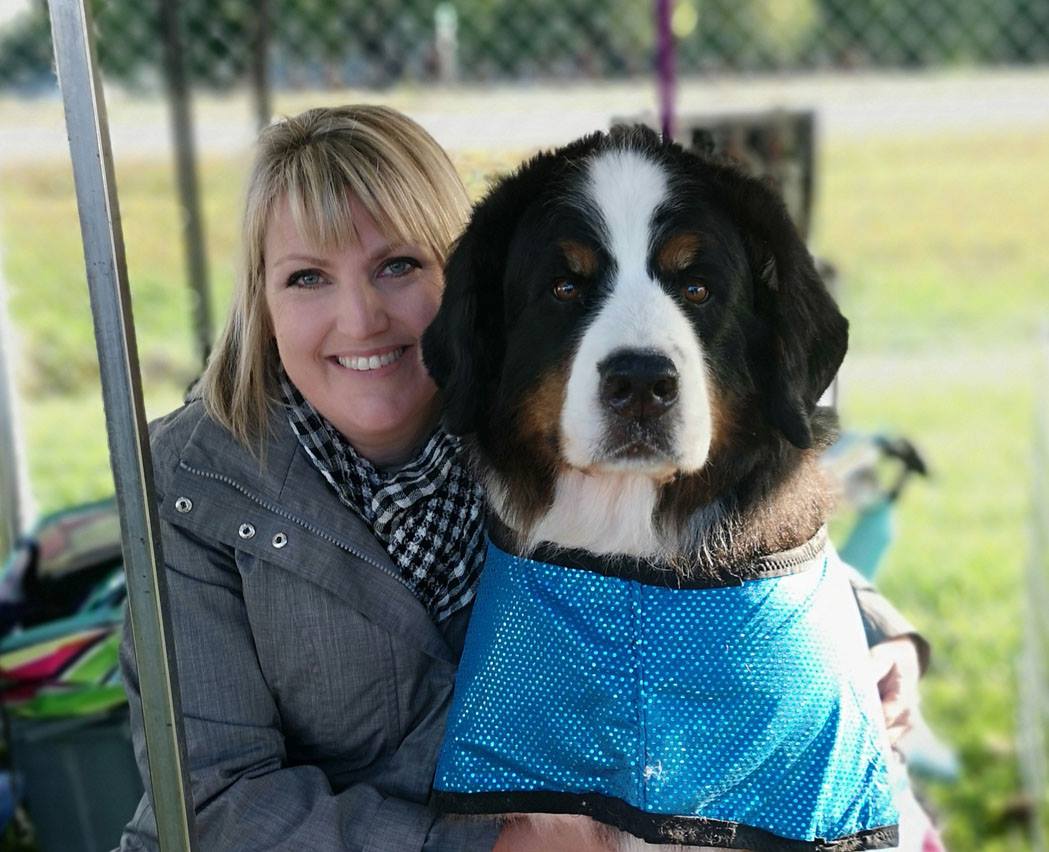 Kim has been involved with Bernese Mountain Dogs for 28 years and was introduced to this wonderful breed by her mother, Sharon Groves who started breeding berners under the kennel name “Labernese” in 1992. Since 2005, Kim has been breeding Bernese under her own kennel name “Avatar”.

Kim has handled many great Bernese over the years to some amazing wins, including several Canadian and American National Specialty winners. Kim feels fortunate in having had her hands on several of the best Bernese Mountain Dogs in North America and enjoys working with the many breeders who strive to improve this magnificent breed. Kim is the breeder, owner and handler of the top winning Bernese of all time, GCH Avatars Try Try Again, who was the Canadian Kennel Club’s Top Show dog for All Breeds in 2009.